Despite the weekend disappointment, this has been a good week so far. Speak it softly but I am actually enjoying work at present. The stuck stuff is on one side and I am developing new analysis tools to help service delivery. Sounds a bit corporate, but the purpose is to make everything more transparent. All the work is closed up for last month and I am working on the figures. Should be complete tomorrow. We have 5 working days so this is well ahead.

I want to get another cat. Anyone who knew the splendid Rosie will know why. (Rosie was a he. Don’t ask.). I have been waiting on the work on the house next door. A landlord owns the 3 houses on that side. I’ve had some problems with him. The one next door has been vacant and in very slow restoration for near 8 years. Now, finally, it has a back door. My late cat was a consummate scrounger (The feline Ed Riordan) and caused a lot of neighbour disputes by acting hungry when he had plenty of food at home. 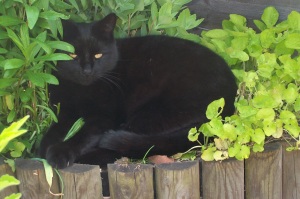 Here is the old chap. He was a neutered tom. A great character. He loved people and would turn up if there was anyone to meet. Loved to be picked up and would drool when happy, which was useful with double glazing salesmen. Apart from the odd intact tom, he was boss cat of the street. The cats would sit as far out as they dared, like gunfighters. Rosie would roll on his back in the street – but beware. It was a trap. He was quick, clever and loud.

He used to belong to my former neighbours. I knew him from a kitten. I took him on when they couldn’t take him when they moved. When I took him on his coat was greasy. His gut was distended with parasites and he had fleas. Soon dealt with and he matured into a fine fellow.

When he died he was about 14 but in superb shape. You can see his silky coat in the picture. The vet reckoned he had the mouth of a kitten, maybe aided by his high rodent consumption. He once brought in a squirrel, through 2 cat flaps . He could hold it but not kill it. The noise was awful. He was very popular at the cattery where he went on his holls. Quite relaxed about doing so after the first time.

He died rather as he lived. He was scrounging food in another cats kitchen. He got chased out and was hit by a car. He was left on the pavement, presumably by the driver. He wasn’t marred except the right side of the head where he was hit. I was glad to have him back over night. My garden isn’t big enough to bury a cat safe from foxes. I had him cremated. Expensive but less than the vet’s bills he accrued from fighting. My friend Camilla is a teacher and sculptor. She made a sort of pottery caricature (caticature?) which incorporates his ashes. He looks down from a top shelf.

I have met a few black cats over the years. Usually loud and full of character. Beautiful silky coats too. I am interested to find black rescue cats are hard to place. Well, good for me. I wouldn’t have anything else.

This entry was posted in Uncategorized. Bookmark the permalink.