Rosie started life with my neighbours, the Scott family. He had a brother they named Buster. He was a ‘blue’, a lovely soft grey colour, but not a friendly cat. Unfortunetely he was hit by a car. Rosie spent ages looking for him after that. I never really kinew why the called Rosie she. He was quite slim and slight when young, so looked more female, but the bits were never right. 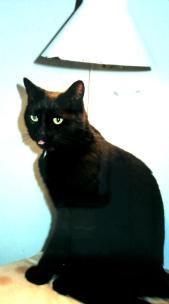 He started visiting me when the Scotts had their first child. I was scrupulous about not feeding him, but a certain F. Grove was less so. He would always turn up when there were people around. When he was young he used to be a bit untidy with his tongue and would drool when he was purring. He had a real obsession with cardboard boxes. Here we see him about to try out a new one. If I had a parcel delivered and took it up to bed to open, he would paw at it until he got the chance to try it.

He didn’t care if the boxes were too small, but was equally happy sprawling out.

At some time he became mine. The Scotts had moved to a house a few hundred yards away, then their son had Asthma so Rosie was confined to the garage, then they moved out of the area and into rented accommodation.They could not take him. so we agreed he would be mine. He had been living a rather nomadic existance and wasn’t in good shape. I had him chipped and innoculated and the fleas and worms dealt with.

I remember trying to get him into a pet carrier to take him to the vets the first time. It was a plastic carrier with a small door at one end. I could not get him in. he would always get a limb or two in the way. In the end I got my neighbour Camilla to help me. She was used to picking cats up by the scruff with I still am not. l was a nervous wreck but Rosie stayed calm. He had plenty of chances to take my eye out, but never did. He scratched Camilla more than he did me. Eventually we were on our way, a low howl coming from the box. Good as gold with the vet and very willing to get back into the box to come home.

Rosie died in 2012. He died as he lived. He was in another cat’s kitchen stealing food when he was chased out into the road and hit by a car. That road is a short cul de sac, so nobody should have been going fast enough. He was found on the pavement, where I guess he had been put. Just an injury to the side of his head. I was desperate.

He was cremated. My friend Camilla incorporated his remains inside a clay sculpture, which watches from a shelf in the living room.

For a long time I didn’t want another cat. They are a bit of a tie, especially if they have to go to the cattery when I’m away.

I eventually decided and went to see cats at Battersea. Just a week later I was the companion of Olly, formerly Bluey.

He’s a big tom tabby, Bullseye pattern. He ran away after 2 weeks, moving in with an elderly female cat. After another couple of weeks he’s fine. When I first had him he moved silently. Now he stomps about the place.