I don’t remember how much I said before. I planned just to get the drive of my house re-concreted. I talked to a neighbour who does these things and he persuaded me block paving would be better. The fence needed replacing too. It ended up being the drive, the wall at the end of the garden, the wall alongside the drive, drainage, removal of my (dead) flowering cherry and (live) laburnum. I used rather a lot of the money I had for these things.

Nevertheless, I am very pleased with it. Paul (the builder) suggested paving most of the garden. I resisted. The drive needed to be a bit wider at the entrance as it was hard to use with the parking around, but no more than that. I kept my little pond and came up with the radius to soften it and make entry easier. The old wall was made from blocks stood on their ends, with plants in the holes through them. The new has recesses and I hope to see a riot of campanula in them again, when they get over the shock.

I chose a herringbone pattern with bricks which should develop a more yellow colour, if the catalogue is to be believed. Paul suggested a grey cobble style set straight. I wanted something a bit more Victorian like the house The herringbone reduces the appearance of variations in width  The wall is an old red brick style.  My small pond is in the curve on the right – lots of iris Siberica. Some tadpoles despite the drastic winter. 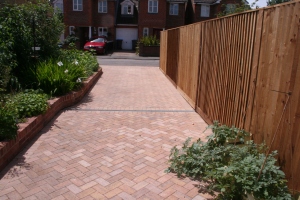 This is a view the other way. The drain strip is the lowest point. The ends are about level. The soakaway is below the near part.

Here are a couple of the recesses with Campanula behind and recovering.

I have pictures like this of the drive as it was, but they are on paper. I will have to find them and scan them. I hid the car when I took these. A neighbour suggested I needed a new car to go with the new drive. The price was comparable. the drive revealed that my old Polo was leaking oil. Turned out to be an oil breather problem. More money!

Here are the rest of the pics http://s1127.photobucket.com/user/Protobikes/library/New%20Drive%202013

This entry was posted in Uncategorized. Bookmark the permalink.