“While still on the subject of records, it seems that there are at least three teams planning serious tilts at Sam Whittingham’s Hour record, with the intention of:

raising it over 50 mph

There’s John Kingsbury and the K2, the collaboration between Tim Elsdale and Graeme Obree and news of a German group with Axel Fehlau as rider. Less concrete rumours include a possible attempt by Freddy Markham in a Gardner Martin designed machine, and I can’t imagine Bram Moens and/or Ymte Sybrandy leaving it alone either.”

“What happened to the Obree HPV Hour Record threat?”

“Tim Elsdale underlined his Unfaired championship with a convincing win, and seventh overall” 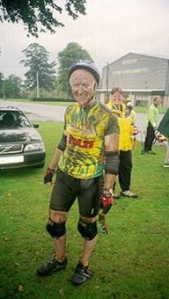 Tim Elsdale after a race in filthy weather. Imagine following a wheel!

“Three artists impressions of Jason Queally’s machine. Information received recently indicates that the machine might not be a prone after all. The last device looks uncannily like the stillborn Hotta/Graeme Obree project – I wonder if they are by any chance related…”

I searched for the picture of Graeme Obree riding the Chris Field/Hotta Chassis which became the Blueyonder, but could not find it.

This entry was posted in Battle Mountain 2012. Bookmark the permalink.